You’re probably thinking that it’s Anderson Silva, or Jon “Bones” Jones…even Georges St. Pierre. All three massively popular fighters that have legitimately earned the praise from both fans and their colleagues alike.

Yet, it is none of them.

No, I do like watching them all fight, and depending on the opponent, will probably root for them. No, my favourite fighter is none other than Chael Sonnen. 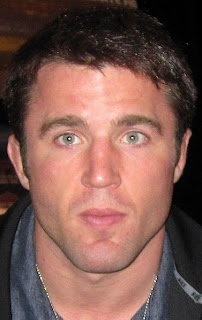 What’s that? Your rage is building up? Good, read on.

Granted, he may never win the “10 pounds of gold” in the UFC, but he’s been a champion elsewhere, so that’s good enough for me. I personally think that the UFC has become an one-dimensional caricature of itself, and that’s why they desperately need guys like Sonnen in their company.

Can he beat a lot of people? Sure. Can he win every match? No, as it has been demonstrated by both of his losses to Silva. I will say though, that he’s come the closest to dethroning the dominant Middleweight Champion in their first fight, but deviated from the game plan in the second one (spinning backfist is comical to say the least…although I do speculate that Sonnen took a dive on this one), costly him the rematch for the title, likely to be his last one…until either someone beats Silva, or he retires.

Let’s be realistic, it’ll be when he retires.

For comparison sake, let’s look at the other top fighters in the UFC:

Anderson Silva: The Spider is fantastic to watch, but you know that he’s getting bored with beating everyone. Even if it were up to him, he wouldn’t give Sonnen another title shot, simply because he would get beat. Plus his “English not so good”. Seriously, these guys need managers like Paul Heyman. Speaking of Paul E…

Brock Lesnar: almost as entertaining as Sonnen, but where Chael would use a scalpel to figuratively slice up his opponents with words, Brock would use a machete. But Dana pulling the leash a bit tighter, and a couple bouts with diverticulitis really calmed him down into an UFC robot. After his last fight with Alastair Overeem, he retired from the UFC and went back to the WWE. Millions of dollars a year to do about 4-5 fake fights? Sign me up!

Forest Griffin: he was entertaining at first, but then he got lazier and stopped caring. It shows in his fights now.

Jon Jones: “Bones” was squeaky clean until the DUI arrest…and now he’s ducking Sonnen, who would have taken the fight at UFC 151 on short notice (eight days). Cowardly move in my opinion, and Dana’s pissed…despite the fact that Dana White is the biggest pizza-making tool on the planet, I actually agree with him for once. Bones Jones is like Rocky Balboa from the beginning of Rocky III, with about a quarter of the charisma and talent.

Georges St. Pierre: again, another great fighter, but boring as hell on the mic. Too nice of a guy, plus the whole language barrier thing. The UFC should turn him heel and pair him up with a manager like Jim Cornette. Now that would be entertaining!

The rest are not worth mentioning because they are all robots programmed by Dana and Lorenzo to say the same boring crap over and over agains…except for Josh Koscheck and Diego Sanchez. Both are epic douchebags that I enjoy seeing get beat into the ground.

Anyways, what makes Chael Sonnen so special is that he’s something that most of the UFC (and MMA fighters in general) aren’t…entertaining. I want to hear his press conferences and interviews. I want to know what he has to say about his upcoming opponent, or someone else altogether. Because let’s face the facts…yes, sports are real, but they are not in the context on how it relates to real life. First and foremost, it’s entertainment

Whether or not you like him (most people hate him), he is entertaining. If nothing else, he is very smart in having a career outside of the Octagon, being a licenced realtor in his home state of Oregon. Also, he would absolutely kill in the WWE or TNA. Speaking of which, even those guys could use some pointers themeselves on how to “get themselves over”…

This site uses Akismet to reduce spam. Learn how your comment data is processed.